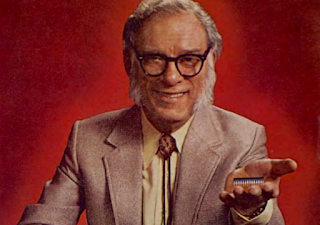 Well, here's the Pringle Science Fiction 100 list of bestselling authors. The other categories were easy pickings for the goyim; fantasy literature is essentially just us writing our mythology. No way would we dominate Science Fiction. The category was practically invented by a Jew (Hugo Gernsback), and the biggest names were Jews, including Isaac Asimov, Carl Sagan, and editors Horace Gold, Donald Wollheim, Martin Greenberg.
For those who missed the method earlier, these are various "best of" lists, or author awards, and those authors' actual sales on ebay. With the politicization of the publishing process, and the ongoing discrimination against straight white men in academia, publishing and award shows, I wanted to show what a folly this strategy is. The top 10 sales are the highest 10 ticket items sold on ebay under that authors' name, including first editions, autographs, book lots, anything. This would indicate collector value, and some indication of writing quality. The last 90 days are the number of units sold by that author, indicating mass popularity.


As can be seen clearly here 9 of the top 10 Science Fiction authors are straight white males. Any marketing or sales plan discriminating against this group is headed directly for failure. The dodge that Jews have tried is to push themselves, far-left authors, white homosexuals and white women, and various non-whites instead of white men.
These efforts have failed spectacularly, with diversity hires such as Sofia Samatar and Nnedi Okorafor barely selling one book a month on ebay. Amusingly, when they do allow a white man to sneak in a book here and there, they prodigiously outsell the burger king kids' club. The entire publishing industry shouts "down with white men" in a single voice, yet exist solely on the output of Dan Simmons, Neal Stephenson, China Mieville, Brandon Sanderson, George R. R. Martin, etc. The best-selling Jew right now is Neil Gaiman, and he does quite well, but even he's behind Tolkien, King, Cormac McCarthy, and others. The only other big Jew missed by this chart would be Harlan Ellison. So anyone saying these charts miss the big authors, I hate to tell you I can expand to include Martin and Sanderson, and that would knock Gaiman and Ellison right back down. White people create literature that, like our civilizations and cities, lasts the longest over time. Deal with it.
Here's the breakdown by group:

Anyone arguing that the diversity hires will form the big collectible authors of the future is similarly delusional.  If you think the people of 2100 a.d. are going to reference Seanan McGuire the same way they reference Tolkien or Orwell, you are absolutely insane. The diversity hires lack any reference to philosophy or previous literature; they write in current year patois; and they lack any universal moral reference. This project has definitely inspired me to somehow start a publishing adventure that publishes, in physical formats, only fiction by high iq, straight white men of any political background. I'll bet it would outsell Tor and every other major publishing branch within ten years, starting even with complete neophytes.
One day the story of Jews destroying literature will be told. Joanna Russ, pictured below, started as an intelligent playwright at Yale University, and degenerated into a crabby lesbian, publishing unimportant works. In her role as caustic critic, how many white men's careers did she disintegrate out of malice and lack of critical distance from her personal politics? Barry Malzberg, pictured below, was one of the talent scouts at Scott Feldman's Meredith Talent Agency, the premiere science fiction literary agency of the 1960's and 70's. He famously tells of passing on Stephen King's early submissions. Of course he did. 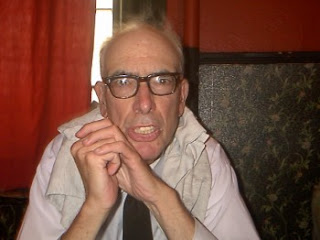 Posted by GithYankee at 4:59 AM